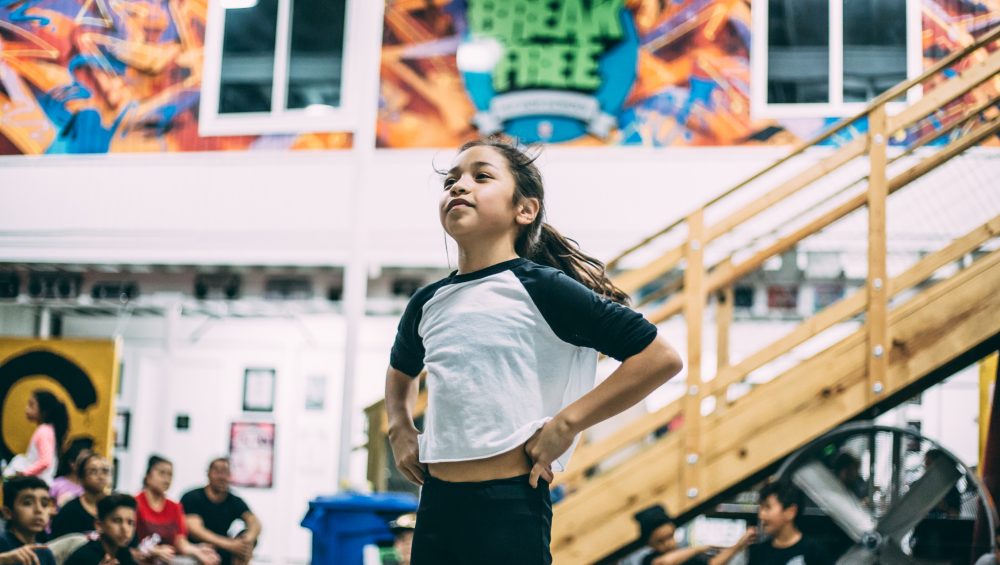 Break Free Worldwide LLC. is a global corporation that offers a cultural education module, highlighting a standardized curriculum focused on the teachings of the four elements of Hip Hop ( Breakin’, MC’ing, DJ’ing, and Visual Art) These can link back to the classes. This component is powered by a career building program for artists, specializing in the procurement and execution of education or entertainment events for both public and private sectors.

The ideals, visions, truths, and impacts of the Global Hip-Hop Community are all represented through Break Free Worldwide by it’s pivotal approach to creating platforms for aspiring artists on their journey to building a career path. As industry leaders in Hip-Hop Education and talent development, Break Free uses its foundation of passionate, experienced,and world-class members coupled with its utilization of cutting-edge technology to push a unified vision of Peace, Love, Unity, and Having Fun.

The Break Free model was first conceptualized by Founder Moises “B-boy Moy” Rivas as a young man growing up in Houston, Texas. Raised in the crime-ridden area of Magnolia on Houston’s Southeast side in the mid-90’s landscape, Moy was confronted daily with life altering decisions – decisions that could negatively impact a person’s future. With few options available, the only thing he could see in his future was a set path for him and his friends, undoubtedly leading to a tragic end. He felt chained to this pattern. It was not until he discovered Breakin’ that he could create an escape from that.

He was introduced to Breakin’ at a talent show being held at his middle school. And although he had outwardly appeared unmoved by most of it, at the very end of the show, there were a group of of his friends that came out gliding, spinning, and rocking beats. It was that moment that ignited an interest in wanting to know more and experience it for himself. He began practicing with these friends – it became an obsession with him, practicing from the moment he arrived home from school into the late night.

In 2000, Moy won his first international event by winning Out for Fame in Los Angeles, CA. He began traveling all around the globe with Tribal Brand, an international Hip Hop brand headquartered in San Diego. In 2004 he began serving as a cultural ambassador for the US State Department, spreading the message of Hip Hop internationally. In 2010 Moy received the Spy Award from Rich “Crazy Legs” Colon of The Legendary Rock Steady Crew, the most prestigious award that can be received by a Bboy or Bgirl. He has been featured in numerous films, commercials, national/international award shows, and national talk shows.

Amassing World Titles in over 60+ countries around the world, Moy used his track record, experience, and reputation to fortify his vision of Break Free. With the start of the Monster Energy Breakers program in 2013, This program has forged career paths for numerous artists, and the program has effectively executed performances, competitions, and initiatives on a global level.

With the establishment of Breaking as an Olympic Sport in the 2018 Buenos Aires Youth Olympic games, Moy was appointed as one of the head judges and athlete role models of the competitions, and an eventual model athlete and advisor for the WDSF (World DanceSport Federation) Board.

Moy has worked to become one of the most influential figures in B-boy culture. His mastering of this dance form has catapulted him into becoming a pioneer in the community. His talent and perseverance has allowed him to break free from the chains that bound him to his seemingly pre-destined path. He created his own escape.

Opening in 2011, Break Free Community Center actualized Moy’s vision to create a space for anyone to come and participate in the culture of Hip Hop. Over the course of the next 3 years, the Break Free vision grew under the roof of its flagship facility as the class curriculum for the Breaking program began to take form. In 2014, Break Free Community Center transformed into Break Free Hip-Hop School; a full fledged arts-institute for the 4 elements of Hip-Hop culture (Breaking, DJ, MC, and Visual Arts).

In 2016, Break Free Hip-Hop School executed it’s first global initiative: the “24/7 Cypher”. This campaign was aimed at raising money for under-financed Houston area youth. By the end of it’s 50-Days straight run of dancing day and night by the Break Free staff at various locations in Houston, $30,000 was raised to pledge towards scholarship applicants.

The 5th location for the Break Free Hip-Hop School branch opened in 2019 with Break Free Hip-Hop School: Northeast Houston. With plans for Break Free Hip Hop School locations to open nation-wide, the first quarter of the new decade saw a pivotal moment in Break Free Worldwide LLC’s history with the execution of a significant business partnership, bringing on Ionel Nechiti as the Chairman of the organization on  March 5th, 2020. This partnership was set in motion to set the company on a trajectory of standardization, accreditation, and global expansion.

The future goals of Break Free include growth, inclusion, and innovation. Break Free hopes to gain membership on a global scale by producing quality programming and events. The institute of certification to be developed by Break Free Worldwide LLC. will attract new Pioneers within their respective art-forms, and solidify their career paths as artists and professionals. Active Trainers for all 4 Elements of Hip-Hop Culture will be given the resources they need to provide the proper training and certification for their advancement.

With the inclusion of Breaking in 2024 Olympic Games, Break Free Worldwide LLC will prepare an official team to represent at the Games. Utilizing key partnerships and collaborative affiliates, Break Free Worldwide LLC. will reach demographics and markets spanning 4 Worldwide regions. The solidify the impact of the global Hip-Hop community, Break Free Worldwide LLC. looks to unite and bring solidarity to the culture. Introduce global companies to the Breaking, DJ, MC, and Street-Art cultures via strategic sponsorships of events, athletes, and influencers. Bring a viable career path for the practitioners of the 4 Elements of Hip-Hop Culture, and bolster the economic culture of the scene. Standardized artist and athlete rankings via data tracking, accreditation, and peer-reviewed user profiles. Create proprietary softwares utilizing cutting edge digital platforms to elevate the digital imprint of the Global Hip-Hop Community. We also hope to pioneer cutting-edge events. One such event is being introduced at a very challenging time, during the unfortunate COVID-19 outbreak that we, along with the rest of the world, are experiencing. The Break Free Worldwide Championships is the first event of its kind and caliber to showcase B-boys and B-Girls from across the world via streaming, live battles. It will be a 6 day event and will take place in April 2020.